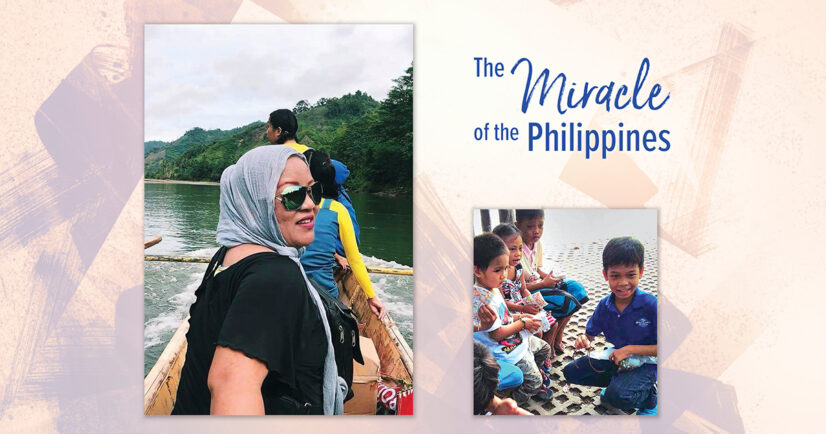 ABOVE LEFT: CGBox Director in the Philippines, Rev. Delia Subio Vaughan, training children’s leaders in a very dangerous region
ABOVE RIGHT: Child sharing the gospel with other children in the Philippines using CGBox resources

From Mary Lou Canata to Della Subio Vaughan, Generations Have Been Reached for Christ

One of the very last praise reports that Dr. Mary Lou Canata ever heard on this side of eternity involved the Children’s Gospel Box ministry in the Philippines. She had ministered there many years before, seeing great fruit. But upon hearing how many children were now being reached by the ministry she co-founded, she wept.

Dear friends of Mary Lou’s, Fred and Leah Horner, former missionaries of the Philippines, had returned to this many-island nation to initiate Mary Lou’s CGBox ministry.

Among their two dozen early trainees, a young, gifted pastor with a passion for children, Rev. Della Subio. After training, Fred, the Asia Regional Coordinator for FMP, continued to mentor Pastor Della via phone, email, and return visits, monitoring her ministry.

It didn’t take long to discover that Fred had found the “Mary Lou Canata of the Philippines.” Della, along with some of the other trainees, stormed the islands, fearing no man, only God. They won the hearts, minds, and souls of thousands of children, and even adults, while doing evangelism rallies and training of local children’s ministry workers. Their exploits often led them to remote, rural areas – sometimes into dangerous regions. In some 15 years, this team of devoted workers, trained and supervised by Fred and led by Della, saw over a half million children attend rallies, most accepting Christ and being discipled through the local churches.

Fred, like Mary Lou, thought he was “retired” until the Lord called once again. As Mary Lou had done so many times before, Fred invested in a team of younger, passionate believers who only needed some training, resources, and to be released into ministry.

After some 17 years, the Children’s Gospel Box continues to be a primary reaching and teaching ministry to children in the Philippines. God often uses one generation to inspire another generation to reach the next generation.

Fred has officially “retired,” although he often speaks in local churches; and Della has expanded her CGBox role, working in the US with husband Jerry Vaughan to not only supervise the efforts in the Philippines, but to also see expansion in Papua New Guinea and beyond.

An honor that includes past recipients like Dr. Jack Hayford, Dr. Paul Risser, and Dr. Evelyn Thompson, the award is named after FMP co-founder J. Karl Williams. At the age of 70, Karl felt his best days were behind him until the Lord gave him a vision to start FMP and told Karl, “The next 15 years of your life will be your greatest.”

Rev. Horner has served the Foursquare family in multiple roles, producing godly fruit, along with his wife, Leah. Past ministries include senior pastor, missionary work in the Philippines, FMI Regional Supervisor for Asia, and FMP’s Asia Regional Coordinator. Fred and Leah live in Hemet, California where Fred often serves churches in an interim pastor role. They have three adult children and eight grandchildren, plus one great grandchild.

Della Subio Vaughan has planted churches, and has served as a senior pastor. She had multiple roles as a district administrator for the Foursquare church in the Philippines. She currently serves as Director of the CGBox – Philippines, while living with husband Jerry Vaughan in Hemet, California. Both Jerry and Della are often available to speak and also to share how your church can get involved in the CGBox ministry.

Powered by Convert Plus
Send this to a friend